Wow, a lot has happened since my last post. I've worked six days on my new job, visited another lodge in my district, and performed the 6th Degree with the Lodge of Perfection cast in a one-day class for the Scottish Rite. I still haven't found a Passover seder for Wednesday night.

I'm in training at my new job, learning the presentation I'll be giving to new clients, learning my way around the user interface our clients use, and how to handle the various errors that happen during setup. The official training schedule has me learning new things for at least another week, then sitting along with an experienced analyst through each step in the setup procedure, then I'll be doing it solo. I'm really excited, and feel really confident that I can do a good job here. The commute is manageable with public transport, and allows me easily to go to my lodge, my synagogue, and Grand Lodge after work.

I had to leave early the third day of work for rehearsal at Lodge of Perfection, and got outed as a mason. I bought a gold and onyx masonic ring on eBay. It was a steal: a 1930s estate piece, retailed for $1499 but I got it for $160, and they would only deliver it to me if I signed for it in person, so I had to have it delivered to my new job, and everyone saw it. 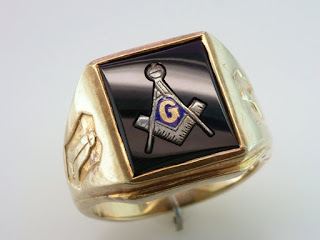 Please understand that I'm proud to be a mason, but don't really want to tell everyone I work with that I'm in the Craft before they know anything else about me.

The Valley of Boston meets on the 7th floor of the Grand Lodge building downtown. It's easier to get to Grand Lodge from work than it is to get home from work. I only had a walk-on part, credited as "Tribesman" in the program. The dress rehearsal was pretty much flawless, and I was really excited to put on the actual performance. 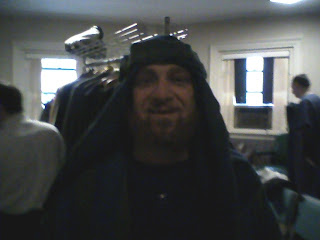 The next night, I visited the lodge of a few brothers I met at the Grand Lodge communication. My District Deputy Grand Master is still the Worshipful Master there. I came straight from work, taking the subway there. The building is old, late 19th century, and was built to be a York Rite building, and still has an active Royal Arch Chapter there. I'm not yet a York Rite brother, but I intend to be in the future. The walls are full of Royal Arch and Blue Lodge memorabilia, some of which is nearly 150 years old. The lodge is the oldest of five that meet in the building, which has two lodge rooms. The larger one has a working pipe organ, and is enormous. This is the mother lodge of my lodge's organist, and he's the organist there, too (as well as being the Grand Organist).

It just so happened that they were electing on five petitioners and an affiliate member, had a huge chicken dinner, were raising four brothers to the Sublime degree of a Master Mason, were awarding a Past Master's jewel, and had a birthday cake for the lodge secretary, so it ended up being a long night. That being said, it was a delight to sit with a great group of brothers. I knew the brother who was affiliating, because he is a Past Master of another lodge I have visited, and a friend. I got to talk to the four Fellowcrafts before their raising, and I liked them all very much. The ritual was expertly done, and even though I was totally exhausted by 11:30 PM, at the end of the night I was happy and exhausted. The brother who drove me and the new affiliated member home was taking the Scottish Rite one-day class that weekend, along with another brother at his lodge.

Two days later, I awoke at 5:30 to be at the Grand Lodge building by 6:30 AM to wolf down breakfast before rushing upstairs for costumes and makeup. At breakfast, the brother who sponsored me in the Scottish Rite, a police officer, noticed my antique jewel. It turns out that a jewel just like it was stolen around the time I bought mine on eBay. We brought it to the Consistory secretary for him to examine, and it turned out not to be the missing jewel. I would have happily returned it, but it was a different jewel, so I wore it proudly for the rest of the day. It looks a lot like a modern Masonic Service Award (MSA) jewel (think of it as a 32.5°), which caused a bit of confusion, but nobody objected.

We hit the stage at 8:30, and by 10:00 I was out of makeup and my costume, back in a business suit, and ready to celebrate with the cast at a nearby restaurant. I came back afterwards for the other degrees. My DDGM was in the cast of the 18th Degree with Rose Croix, and one of the brothers who had a speaking role in my cast was the lead in the 23rd Degree. The Consistory cast did an excellent job. When it was over, I went home on the subway with the brother who drove me home two nights previously. I love these one-day classes, but they are exhausting. I can only imagine what they are like for those who are in more than one degree, or more than one Scottish Rite body. Our valley does two of them a year, and the neighboring valleys do a monthly or bimonthly offering.

There was a Shrine recruiter with a card table at the Collation, and I signed up for a nite for potential Nobles, on a night I probably can't make. I'm interested in joining the Shrine, but I'm wary that it will take up even more of my life than I'm already giving to other branches. But I really want the fez. If my girlfriend bought me a fez, she could wrap me around her little finger. Good thing she doesn't read this blog.
Posted by 47th Problem of Euclid at 6:50 PM