Inside Sentinel and Kabbalah

I have been installed as the Inside Sentinel of my lodge. I'm now an officer. I've been going to the officer's rehearsals intermittently, but now I'm required to go. I need to acquire a tuxedo. Sitting in one of the officer's chairs, with the jewel of my office around my neck, is a change of perspective. Looking at what happens inside the lodge from the perspective of guarding the lodge from things that get past the Tyler changes one's focus. Especially because he has a sword and I don't. Traditionally, the Inside Sentinel gets a poignard, or ceremonial dagger. I'm not sure that I get one, but I'd love to. I would imagine that, come September, I will have a different role to play in the lodge, but for now, I'm very pleased with my new responsibilities. 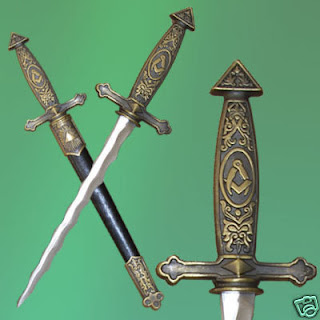 I was invited to go to a recruiting dinner for the Shrine tonight, but I've declined. I wanted to bring my girlfriend (who was also invited), but she had final exams this week and is wiped out, and I don't like missing Friday night Kabbalat Shabbat services unless overwhelming gravity pulls me away. Even though I had a lovely Passover seder, and really enjoyed the Birkat HaChamah, I've been feeling spiritually out of sorts for the last week or so, and need to cleave to the Lord a bit to straighten myself out. Some time tomorrow afternoon I should feel better, after Saturday morning services and the Men's Group meeting. I'm not sure what it is. I'm not keeping to my diet, I've been eating leaven during the latter days of Passover, and even though I'm not skipping my morning prayers, I don't have the time to pray before work that I would like, and if I did, I'd want to spend it in the gym I'm not visiting.

The counting of the Omer is a mystical tradition in Judaism. Starting on the second day of Passover, and continuing until Shavuot, fifty days later, Jews are commanded by the Torah to count each day, 49 of them. 49 = 7 x 7, and seven is a mystical number in Judaism. God created the earth in seven days. Also, in the Tree of Life, there are ten s'firot. The three top ones, Keter, Chokmah, and Binah, exist in a higher realm, an ineffable existence. I don't really understand them very well, so I'll be silent about them.

The bottom seven are more concrete and tangible. Chesed is translated as "lovingkindness", and G'vurah is translated as "Severity". These are polar opposites that get balanced in Tiferet, or "Adornment". That's not a good explanation of Tiferet. Tiferet is where blissful gentleness and righteous action are harmonized into into something as cool as the other side of the pillow. The next polarity is between Netzach and Hod. Netzach, or "Victory", is leadership, righteousness, endurance, while Hod, or "Majesty" is being part of a community, intellectuality, ritual. The rabbis assert that Moses was Netzach and Aaron was Hod. It is when Netzach and Hod are balanced that we get Yesod. Yesod is the province of the Moon, of sexuality and dreams.

Finally, all the S'firot condense into the final s'firah, Malkuth, or "Kingdom", the realm of matter and earth. The Shekhinah, or Bride of God (the feminine aspect of God) dwells on earth, in exile with us. The Tabernacle, and later the Kodesh HaKodashim, or Sanctum Sanctorum, or Holy of Holies of the Temple, was the dwelling place of the Shekhinah, that portion of God that lives as God-on-earth. When the Second Temple was destroyed, the Shekhinah was exiled along with the Jewish people, and our suffering is Her suffering. On Friday night services, the Kabbalat Shabbat ritual invites her into the synagogue, as the Bride of God. A wedding party is organized, and we run to the front door to greet her with song and dance, singing Lekha Dodi, the bridal song of the reunification of the male and female aspects of God. The Sabbath is the one day of the week in which the male aspect of God reunites blissfully with the female aspect of God in an explosion of joy that every religious Jew basks in. The kabbalists warn us that there is Keter in Malkuth, the same way the Hermeticists claim "as above so below".

I have to be careful here not to offend. Jewish husbands and wives are invited to imitate what is going on above. Indeed, it is the holiest time in which to do so. But just as one can have a lot of fun at a wedding without being the bride or groom, everybody gets to enjoy the bliss of Shabbat, merely by noticing that Shabbat is occurring, but more especially by greeting the Shabbat with candles, prayer and song, bread and wine, and meals with friends and loved ones, and by saying goodbye to the Shekhinah in a significant way a sundown later.

This is supposed to be a very profound experience for those who commit to the practice. Because I worry that I'm not giving the Kabbalah its due, I feel bad that I've missed the first few days of the Omer.

For those of you who know Kabbalah through the system spelled out in the Hermetic Order of the Golden Dawn, or later by the OTO, the indigenous Jewish system is a little bit different from what you understand, but your understanding of the S'firot is most likely solid enough to understand this version. Jews don't really care about the paths between the S'firot, and you do. Jews almost never regard s'firah on their own, but rather but them in chord arrangements of two to seven.

It is worth noting that the Jewish liturgy mentions all of the S'firot either explicity or implicitly. Rachamim is usually Chesed, and Din is usually G'vurah. Remember that "and" is a prefix in Hebrew, so "Chokmah uVinah" is Hebrew for "Chokmah and Binah". The B becomes a V when the Beit loses her dagesh before the shuruk. I see "uVinah" in the liturgy a lot more than I see "Binah". Also, there can be suffices, so that הַלְלוּהוּ בִגְבוּרֹתָיו from Psalm 150 could really be translated as Praise Him in His G'vurah rather than "Praise Him for His mighty acts," as King James translates it.

Other masonic stuff: I accompanied the District Deputy Grand Master on a Fraternal Visit to a lodge. I've visited that lodge twice before, and I like them very much. It was fun to be part of the visiting suite. He awarded 3 50-year medals, and I hate to say it, but I left when his suite was over, rather than staying for the four 2nd degrees they were performing that night. This lodge really takes care to give excellent ritual, and it's always a delight to see. I meant my brothers there no insult, but with lodge on Thursday, a new job that is demanding more of me as I learn its parameters, and a hungry dog waiting at home, I felt I should leave when the DDGM did. I've seen their lodge give the 2nd Degree before, and they really did an stellar job with some ritual that can be difficult if done imprecisely. Another brother from my lodge stayed to see their performance, and was very impressed. He missed it the last time I went, and he'll have a large part in this degree soon enough.