The Book of Numbers is thus called because it begins and ends with a census. God commands Moses to count the members of the Twelve Tribes after the construction of the Tabernacle, and again before crossing the Jordan River into the Promised Land. In this first census, there is a separate census for the Levites, who are technically no longer a tribe. Instead, the two sons of Joseph, Ephraim and Manasseh, are each given a tribe to make a dozen. 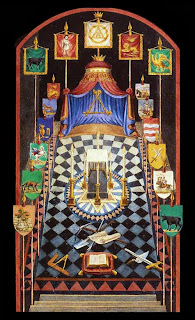 Those of you in the Royal Arch will note how much the symbolism of the Twelve Tribes appears in Masonry. Much of the symbolism comes from Jacob's deathbed blessings to his sons (and two of his grandsons), and the rest comes from a description of their banners and where they were placed around the Tabernacle, from this Torah portion. These banners are part of the layout of a Royal Arch Chapter (like the tracing board above). In the East is the banner of Judah [Numbers 2: 3], in the West is the banner of Ephraim [Numbers 2: 18], in the South is the banner of Reuben [Numbers 2: 10], and in the North is the banner of Dan [Numbers 2: 25]. The Twelve Tribes also correlate to the twelve signs of the Zodiac in Astrology, with the four cardinal points in the Encampment representing the four Fixed Signs of the Zodiac.

About Judah, Jacob says, "Judah, thou art he whom thy brethren shall praise: thy hand shall be in the neck of thine enemies; thy father's children shall bow down before thee. Judah is a lion's whelp: from the prey, my son, thou art gone up: he stooped down, he couched as a lion, and as an old lion; who shall rouse him up? The sceptre shall not depart from Judah, nor a lawgiver from between his feet, until Shiloh come; and unto him shall the gathering of the people be. Binding his foal unto the vine, and his ass's colt unto the choice vine; he washed his garments in wine, and his clothes in the blood of grapes: His eyes shall be red with wine, and his teeth white with milk." [Genesis 49: 8-12].

Jacob gave the firstborn blessing to Ephraim over Manasseh, even though Manasseh was the older son of Joseph and Ephraim the younger. Just as Jacob usurped the primogeniture from Esau, he also ensured that the younger would be blessed over the older two generations later.

About Reuben, Jacob says, "Reuben, thou art my firstborn, my might, and the beginning of my strength, the excellency of dignity, and the excellency of power: Unstable as water, thou shalt not excel; because thou wentest up to thy father's bed; then defiledst thou it: he went up to my couch." [Genesis 49: 3-4].

About Dan, Jacob says, "Dan shall judge his people, as one of the tribes of Israel. Dan shall be a serpent by the way, an adder in the path, that biteth the horse heels, so that his rider shall fall backward." [Genesis 49: 16-17].

The animals come from the Vision of Ezekiel, and are reiterated in the Book of Revelations, and are as symbols of the Four Gospels: Matthew is a Man, Mark is a Lion, Luke is an Ox, and John is an Eagle. In an English Holy Royal Arch Chapter, there are banners for all Twelve Tribes, but in the American Rite, there are just the four. They also represent the four Fixed Signs of the Zodiac. The Lion is Leo, the Ox is Taurus, the Man is Aquarius, and the Eagle is Scorpio, representing Fire, Earth, Air, and Water. Scorpio, one might think, is represented by a Scorpion, but this sign is also often represented by a fish, a serpent, or an eagle. Why is the eagle the symbol of water? Because it is Scorpio, which is a water sign. Why is Aquarius an air sign? Because it is a symbol of the man who brings water, and not the water itself. The man is rational, and air is the element of rational thought.
Posted by 47th Problem of Euclid at 10:57 PM