Shemot: a Voice from the Burning Bush

The Book of Exodus begins with a telling of the names (shemot in Hebrew) of Joseph's brothers who followed him into Egypt. It recounts the dynastic changes in Egypt that led to the new dynasty having a very different relationship with the Hebrews than the dynasty in Joseph's day. The Egyptians were enemies with the Hyskos, a Semitic tribe in the region, and the new dynasty regarded the Hebrews, as Semites, as a fifth column in their fight with the Hyskos. The Hebrews in four centuries had grown very prosperous and prolific, and they became a distrusted minority group in Egypt.

Just as Joseph had enslaved the Egyptian peasants during the famine, the Egyptians enslaved the Hebrews, and made their conditions very bitter. In order to control their population, the Pharaoh ordered that the midwives put all Hebrew male babies to death. This they were very unwilling to do. As the Hebrew population increased, Pharaoh then ordered all Hebrew male babies thrown into the Nile and drowned.

When Amram ben Kehoth and his wife Jochebed had their third child, they were very afraid that he would be killed by the Egyptians. They hid him in an ark made of papyrus and pitch, and placed it in the rushes on the banks of the Nile river, and hoped for the best. Pharaoh's daughter was bathing in that part of the Nile, and she discovered the ark, and took pity on the baby.

She adopted the baby as her own son (Midrash says that she was infertile), and chose Jochebed as his wet-nurse. Midrash also informs us that his older sister, Miriam, was his nanny as a child. He grew up to be a mighty prince of Egypt. But he still had sympathy for his people. When he saw an Egyptian overseer beat a Hebrew man to death, Moses murdered the man and hid his corpse. The next day, he saw two Hebrews fighting, and when he admonished them, one of the men responded: "intendest thou to kill me, as thou killedst the Egyptian?" [Exodus 2: 14].

Pharaoh ordered Moses to be executed for murder, and Moses fled to Midian to evade his sentence. Midrash suggests that Moses spent forty years in Egypt, forty years in Midian, and forty years in the Wilderness leading the Hebrews back to Israel.

In Midian, Moses could re-invent himself. He came upon a watering-hole. The seven daughters of Jethro, a prominent priest of Midian were being harassed by some shepherds. Moses came to their aid. In thanks, Jethro invited Moses into his family and gave him his daughter Zipporah as his wife. Yet another meeting at a watering hole that led to marriage. Moses waited out his death sentence, which would end when Pharaoh died, and took on the life of a shepherd in Midian.

Moses was tending his flocks near Mount Horeb. There is a midrash that a baby lamb was exhausted and collapsed, and Moses cradled the lamb around his neck, with its legs draped around his shoulders. God saw this, and realized that he was sufficiently compassionate to become the leader of the Israelites and the Lord's greatest prophet.

Moses spied a thorn bush on fire. It was burning, but the thorn bush was not being consumed by the flames. Fascinated, he stopped to investigate.

God spoke to Moses from the burning thorn bush, telling him not to advance any closer, and to remove his shoes, as the place was holy ground. Masons are familiar with this, for reasons that are mentioned in the Entered Apprentice degree. This is the moment of Moses' initiation. God revealed Himself to Moses as the God of Abraham, Isaac and Jacob. God told Moses that He heard the cries of suffering of the Hebrews in bondage in Egypt under a new Pharaoh, and that He had appointed Moses to be the agent of His deliverance, to help God convey the Hebrews to a land flowing with milk and honey (erets zavat chalav). Honey here means date honey, not bee honey.

God tells Moses to appear before the new Pharaoh and plead for Pharaoh to let the Hebrews leave Egypt. In the movie "The Ten Commandments"  the new Pharaoh Rameses is Moses' childhood rival in the Egyptian court. Scripture does not relate this detail. Moses asks God what name (remember that this Torah portion is called shemot or "names". God replies: "I AM THAT I AM". [Exodus 3: 14]. The Hebrew, אֶהְיֶה אֲשֶׁר אֶהְיֶה, could be translated: I was, am and will be what I was, am and will be. Biblical Hebrew only has two verb tenses, the perfect tense and the imperfect tense. The Kabbalists regard this name as the holiest utterable name of God, and associate it with Keter, the Crown, or first sefirah of the Tree of Life, the primordial and cosmic concept of oneness.

He also teaches Moses the Ineffable Name, the Tetragrammaton, and tells Moses to reveal this name to the Hebrews in Egypt. One of the names for God in Hebrew is HaShem, or the Name.

Moses wants proof he can show the Hebrews, and God enchants his shepherd's staff so that it can turn into a snake at Moses' will. I do not know the Masonic significance of this, but it does appear on some Masonic tracing-boards. I own a Wade & Butcher Masonic Straight Razor, most likely manufactured in the 1880s, and it has a Masonic tracing-board etched into the blade, with the staff turning into a snake. Mine is not in as good condition as the one in the photo, but they are the same model: 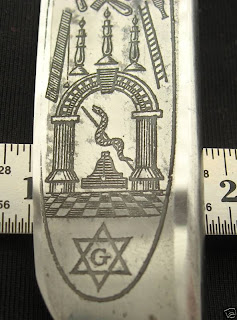 Please let me know in the comments if you know the Masonic significance of this symbol.

Moses sought and gained his father's leave to return to Egypt with his wife and children. During the journey back to Egypt, something weird happened called the "Bridegroom of Blood".


"And it came to pass by the way in the inn, that the Lord met him, and sought to kill him. Then Zipporah took a sharp stone, and cut off the foreskin of her son, and cast it at his feet, and said, Surely a bloody husband art thou to me. So he let him go: then she said, A bloody husband thou art, because of the circumcision." [Exodus 4: 24-26].

It is so weird that the Authorship school of scriptural tradition marks it down as a textual omission.  The traditional interpretation is that God tries to kill Moses, and Zipporah responds by grabbing a flint and circumcising their son, Gershom (or it could be Eliezer). Then she threw the severed foreskin at Moses' feet, and declared, "Surely a bloody husband art thou to me." [Exodus 4: 25]. The term "bloody husband" (chatan dimim) has also been translated as "bridegroom of blood".

It doesn't make much sense, and many scholars are troubled by this passage, especially in its use of pronouns. Who is the "him" that the Lord sought to kill? Which son was circumcised? At whose feet did she throw the foreskin? Who let who go? Why did the Lord want to kill whomever He sought to kill?

God told Aaron to meet Moses his brother in the desert, and they met at Mount Sinai, and embraced and Aaron kissed him, and they shared their stories with each other. They returned to Egypt and gathered the elders of the Hebrews together and announced their plan for liberation, showing the people the miracles God gave them to show them, and won them over. Moses gained an audience with the new Pharaoh, and asked in the name of YHVH to let the Hebrews go, but Pharaoh did not recognize YHVH, and refused. Moses and Aaron warned Pharaoh that plagues would come if they were not liberated, but Pharaoh demanded that they all get back to work.

As punishment, he ordered that the slaves no longer be given straw for the bricks they were forced to make, but rather to gather the straw themselves, without reducing their quota. These were adobe bricks that required straw to hold them together.

Their foremen were flogged for not making their quota of bricks. In their anger, they blamed Moses and Aaron for their troubles. They consulted God about how His plan was making their lives worse, and God told them to watch His plan unfold, how Pharaoh would be forced to let them go.
Posted by 47th Problem of Euclid at 12:35 PM