Installed in the East 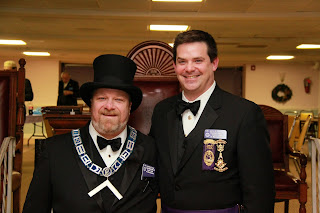 Last night, I was installed as Worshipful Master of Samuel Crocker Lawrence Lodge in Medford, MA. Two weeks ago, I attended a Lodge of Qualification, and took the Chair Degree. This degree is very old: there are records of it being performed going back to the 1730s. It stands in a grey area in Freemasonry in that Blue Lodge Freemasonry comprises three degrees, and this is not one of the three, and yet it is required for anyone who would be Worshipful Master of a Masonic Lodge. William Preston, in his Order of Harodim (his idealized versions of the Blue Lodge degree), offers five degrees: Entered Apprentice, Fellow of the Craft, Master Mason, Past Master, and Holy Royal Arch. In its earliest days, the Holy Royal Arch degree had as a prerequisite that the candidate be an Installed Master (either a sitting Worshipful Master or a Past Master). As the appeal of the Holy Royal Arch spread, lodges were installing Worshipful Masters merely as a bureaucratic measure before Exalting them in the Royal Arch degree. Some lodges in the 18th century were reprimanded for installing six or more Worshipful Masters in a night.

To mitigate this, a Virtual Past Master degree was designed as a substitute for the Chair degree, and this solution is the way the contemporary York Rite handles the requirement in the Royal Arch degree. While I have been elected to Cambridge Royal Arch Chapter in Cambridge, MA, I have yet to take any degrees, so I say this without any direct knowledge, but I have been told there is some overlap between the Chair degree and the Virtual Past Master degree. I made a conscious decision not to take the Virtual Past Master degree until after I had taken the Chair degree. Readers of this blog know that I am extremely active in the Ancient and Accepted Scottish Rite of Freemasonry, both in the Northern Masonic Jurisdiction and the Southern Jurisdiction in the United States. I actually joined Freemasonry intending to be a Scottish Rite Freemason. When I first learned of the York Rite, I was disinclined to join due to the Christian requirement in the Knights Templar order. (To be honest, there are many Jews who have become Knights Templar. The obligation requires a Sir Knight to lift a sword in the defense of Christianity. I know many brothers who regard the Order of the Temple degree as the single most beautiful and inspiring and impressive degree in all of Freemasonry. That being said, and with all due love and respect to my Templar brothers, I am disinclined to become a Templar for many reasons I would be happy to expound in a future post should my readers desire for me to do so).

In the USA, due to a truce between the Scottish Rite and the York Rite, we regard the three degrees of Blue Lodge Freemasonry as the whole Masonic curriculum, with the higher degrees regarded as Concordant rather than central. I am of the opinion that the Blue Lodge is merely the first book of Freemasonry, with the Chapter degrees (or their equivalents in the Lodge of Perfection in the Scottish Rite, or the Lodge of St. Andreas in the Swedish Rite, or other analogues in other rites of Freemasonry) being the second book, the Council degrees (or their equivalents in the other rites of Freemasonry) being the third book, and some version of the Chivalric degrees being the fourth book. The Scottish Rite adds a fifth book with the Consistory degrees in the Southern Jurisdiction, but since the other rites do not, I will not comment on how central they are to Freemasonry as a whole, regardless of how clearly essential they are to the Scottish Rite.

Last night was very special. The District Deputy Grand Master attended, and I had an installing suite of officers consisting of good friends and mentors to me in my Masonic career. Many cherished friends and brothers attended, some of whom were at my Raising. I catered the dinner, and stayed around to clean up the lodge room afterwards. My friends at Amicable Lodge offered me a new pair of gloves and an inscribed gavel with my name, the name of the lodge, and the Square and Compasses on it.

I have made a two year commitment to be Worshipful Master at Samuel Crocker Lawrence Lodge (assuming my brothers re-elect me). I understand that being Worshipful Master is not about having people call me "Worshipful", or parading around in a top hat. As much as the Chair degree and the Installation are impressive rituals designed to impress upon the incoming Master the seriousness of his office (and provide esoteric knowledge designed to aid him in his tasks), the job of Worshipful Master really begins the first time the cell phone rings and there is a crisis on the other end of the phone.
Posted by 47th Problem of Euclid at 9:58 AM